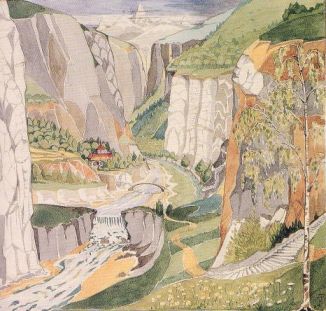 Rivendell was the realm of Elrond. During the Third Age it was one of the few remaining realms of the Elves in Middle-earth. Much of the history and lore of the Elves was preserved in Rivendell and it was a place of peace and beauty.

Geography:
Rivendell was a deep valley in eastern Eriador near the Misty Mountains. It was hidden from view in the heather-covered moors. There was a steep, zig-zagging path leading down into the valley. Fir trees grew on the higher slopes and beech and oak trees grew farther down in the valley.

The southernmost of the two mountain streams that formed the River Bruinen flowed westward through the valley. A narrow stone bridge spanned the river, and on the north bank stood the Last Homely House where Elrond dwelled. There were gardens around the house and a terrace overlooking the river.

Many Elves dwelled in Rivendell, including Elrond's wife Celebrian and their three children Elladan and Elrohir and Arwen, as well as the Elf-lord Glorfindel, Elrond's counsellor Erestor, and Lindir, among others. Many visitors also came to Rivendell, for it was a refuge and a place of counsel and lore. One such visitor, Sam Gamgee, said of Rivendell:

"... we've been far and seen a deal, and yet I don't think we've found a better place than this. There's something of everything here, if you understand me: the Shire and the Golden Wood and Gondor and kings' houses and inns and meadows and mountains all mixed."
The Return of the King: "Many Meetings," p. 265

History:
Elrond founded Rivendell in the year 1697 of the Second Age after Sauron destroyed the realm of Eregion, where the Rings of Power had been forged. Two years later in 1699, Sauron's forces invaded Eriador. Rivendell was besieged but Sauron was unable to conquer it. At last in 1701, Sauron was driven out of Eriador.

That year a Council was held at Rivendell attended by Gil-galad, Elrond, Galadriel and others. It was decided that Rivendell would be the stronghold of the Elves in eastern Eriador. Elrond was the bearer of Vilya, one of the Three Rings of the Elves, and he used the power of his Ring to maintain the beauty and safety of Rivendell.

At the end of the Second Age in 3431, the armies of the Last Alliance under the command of Gil-galad and Elendil gathered at Rivendell. No greater host was ever again assembled in Middle-earth. From Rivendell they marched to Mordor and fought the War of the Last Alliance which ended in Sauron's temporary defeat.

Isildur was slain after the war and the One Ring he had taken from Sauron was lost, but the line of Isildur was preserved in Rivendell where his wife and his youngest son Valandil remained safe. When the North-kingdom ended and the line of Isildur was continued by the Chieftains of the Dunedain, the sons of the Chieftains were fostered at Rivendell in their youth. Elrond also had in his keeping the emblems of the House of Isildur: the Sceptre of Annuminas, the Elendilmir, the Ring of Barahir, and the shards of Narsil.

Around 1300 of the Third Age, the Lord of the Nazgul came to Eriador and established the realm of Angmar. At one point, Rivendell was besieged by forces aligned with Angmar. In 1409, the forces of Angmar attacked the three kingdoms of the Dunedain. Elrond brought help from Rivendell and Lothlorien and they joined forces with Cirdan from the Grey Havens to help the Dunedain. The Lord of the Nazgul was finally driven from Eriador after the Battle of Fornost in 1975, to which a force from Rivendell was led by Glorfindel. 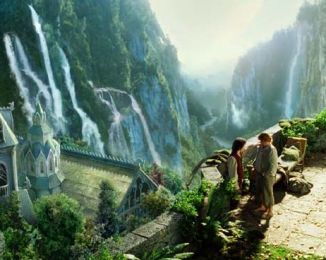 In 2933, when Aragorn became the sixteenth Chieftain of the Dunedain at the age of two, Elrond accepted the boy as a foster son. Aragorn lived at Rivendell until he was twenty and he met and fell in love with Elrond's daughter Arwen there. Though he went on many journeys, Aragorn often returned to Rivendell.

Gandalf came to Rivendell in 2941 with Bilbo Baggins and the Dwarves of Thorin & Company. There they had a short rest before continuing on their quest to reclaim the Lonely Mountain from Smaug the Dragon. One of the reasons Gandalf had encouraged the quest was that he feared that Smaug might be used as a tool by Sauron to wreak havoc in the north and allow Sauron to attack Rivendell and Lothlorien. After the successful completion of the quest, Gandalf and Bilbo stopped at Rivendell on their way home.

Bilbo settled in Rivendell in 3002. He lived there until 3021 and he wrote a history of the First Age called Translations from the Elvish using the lore preserved at Rivendell.

Frodo Baggins headed for Rivendell when he left the Shire with the One Ring in September of 3018. He was pursued by the Nazgul and at the Ford of Bruinen on October 20, Elrond caused the waters of the river to rise and the Nazgul were swept away.

On October 25, the Council of Elrond was held at Rivendell to determine what should be done with the Ring. In attendance were several people who had come to Rivendell with news and for counsel including Legolas of Mirkwood, Gloin and Gimli of the Lonely Mountain, and Boromir of Gondor, who had learned in a dream that the shards of Narsil were in Rivendell. Frodo volunteered to take the Ring to Mordor and destroy it, and a Fellowship of eight companions was chosen to accompany him. Narsil was reforged by the Elvish smiths of Rivendell and Aragorn renamed it Anduril. The Fellowship left Rivendell on December 25.

After Sauron's defeat, Elrond decided it was time for him to leave Middle-earth. In September of 3021, he left Rivendell accompanied by Bilbo and sailed into the West from the Grey Havens. During the Fourth Age, Merry Brandybuck visited Rivendell from time to time and gathered information that was used to compile The Tale of Years.

Elrond's sons Elladan and Elrohir remained in Rivendell for a while and their grandfather Celeborn came to dwell there with them. Celeborn eventually left Middle-earth. It is not known whether Elladan and Elrohir did so as well. One source (App. A of LotR, p. 343) implies that Rivendell was deserted by the time of Aragorn's death in 120 of the Fourth Age.

1697
Rivendell is founded by Elrond.

1699
Sauron's forces besiege Rivendell but are unable to capture it.

1701
Sauron's forces are defeated and driven out of Eriador. Elrond is appointed vice-regent to Gil-galad and Rivendell becomes the stronghold of the Elves in Eriador.

3431
The armies of the Last Alliance gather at Rivendell before heading to Mordor.

1409
Elrond helps the Dunedain drive back the forces of Angmar.

1975
Glorfindel leads a force of Elves from Rivendell to the Battle of Fornost, where the Witch-king of Angmar is defeated.

2851
The White Council meets at Rivendell. Gandalf reports that Sauron is at Dol Guldur and urges an attack, but Saruman overrules him.

2933
Aragorn is brought to be fostered at Rivendell.

December 25: The Fellowship of the Ring leave Rivendell.

3021
September: Elrond leaves Rivendell and sails over the Sea to the Undying Lands.

Celeborn comes to live at Rivendell with Elrond's sons Elladan and Elrohir.

120
Rivendell may have been deserted by this time.

Appendix F of The Lord of the Rings: "The Languages and Peoples of the Third Age - On Translation," p. 412 (Karningul)

Unfinished Tales: "The History of Galadriel and Celeborn," p. 238-39

The History of Middle-earth, vol. V, The Lost Road and Other Writings: "The Etymologies," entry for RIS

The History of Middle-earth, vol. VI, The Return of the Shadow: "From Weathertop to the Ford - Note on the River of Rivendell," p. 204-5 and sketch

All entries are Copyright © by the Thain from former tuckborough.net. Please contact me if you are Thain or know anything about how to contact the original author. 2003-2011, The Thain's Book - thainsbook.minastirith.cz - e-mail: thain at tuckborough.net