Waybread made by the Men of Dale and Lake-town. Cram was used by travelers on long journeys. It was made in the form of compact cakes that lasted indefinitely. Flour or meal were used to make cram and milk and honey were often added. Cram provided sustenance but it was not particularly tasty and was somewhat hard to chew.

Bilbo Baggins and the Dwarves were given cram by the Men of Lake-town when they set out for the Lonely Mountain. Gimli intially mistook the far superior Elvish waybread lembas for cram.

Names & Etymology:
Cram is an Elvish word from the root krab meaning "press." 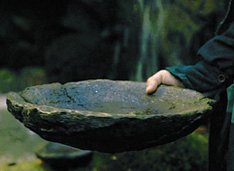 Sustenance of the Ents. Ent-draughts were extremely invigorating - so much so that the Hobbits Merry Brandybuck and Pippin Took actually grew taller from drinking them.

Ent-draughts were brewed by the Ents from the waters of the mountain springs on Methedras. These springs were the source of the Entwash and the water had special properties. When Merry and Pippin drank from the Entwash and bathed their feet they felt refreshed and their wounds were healed.

When Treebeard brought Merry and Pippin to his home at Wellinghall on February 29, 3019 of the Third Age, he gave them each a bowl of Ent-draught from a stone jar. The Hobbits found that it was similar to the water they had drunk from the Entwash, but it was even more invigorating. They felt its power coursing through their limbs and it felt like the hair on their heads was curling and growing. There was a taste or scent like a breeze from the woods. The next morning, Treebeard gave the Hobbits an Ent-draught from a different jar. This one was more filling and had an earthier, richer taste.

By the time Merry and Pippin were reunited with their companions, they had grown noticeably taller. Their exact height is not recorded, but it is said that they surpassed Bandobras Took, who was four feet, five inches tall. 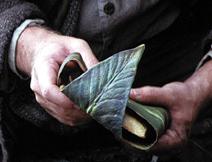 Waybread of the Elves. Lembas was used for long journeys. It gave strength to travellers and could also help bring healing to the wounded or sick. One cake was enough for a full day's march. Lembas remained fresh for many days if unbroken and kept wrapped in mallorn leaves. The thin cakes were a crisp, light-brown on the outside and cream-colored on the inside. They were exceptionally tasty.

Lembas was originally given to the Elves by Yavanna. She sent Orome to give the Elves lembas for their Great Journey to Eldamar. Yavanna made the lembas from corn that she grew in the fields of Aman and the cakes imparted the strength of that land to those who ate it.

The Elves learned to grow this corn in Middle-earth. The secret of making lembas was kept by Elven women called Yavannildi, the maidens of Yavanna. Only they were permitted to handle to corn and bake it into cakes. The highest-ranked woman was called massánie or besain: the Lady, or breadgiver.

The Elves rarely shared lembas with mortals because it would cause them to become weary of their mortality and to long for the Undying Lands, where they could not go. Melian showed great favor to Turin when she gave Beleg lembas to bring to his friend in the wild. This was the first time the Elves had provided lembas for the use of Men. Voronwe shared lembas with Tuor on their journey to Gondolin. Voronwe's stash of lembas had helped him survive many years lost at Sea.

Galadriel gave lembas to the Fellowship when they left Lothlorien in February 3019 of the Third Age. The lembas sustained the travellers on their quest. Aragorn, Legolas, and Gimli ate lembas as they ran 45 leagues in less than four days in pursuit of the Uruk-hai who had taken Merry Brandybuck and Pippin Took captive. Merry and Pippin ate some lembas to revive their strength when they escaped captivity near Fangorn Forest. "Lembas does put heart into you!" said Merry. (TTT, p. 61) Aragorn was able to discern what became of the Hobbits in part because of the crumbs of lembas and discarded mallorn leaf found at the edge of the woods.

On the way to Mordor, Sam Gamgee carefully rationed the lembas, but he worried that the supply might not last for a return journey. Frodo offered some lembas to Gollum, but Gollum spit it out calling it "dust and ashes." (TTT, p. 229) The Orcs in the Tower of Cirith Ungol also disliked the look and smell of lembas, so they left Frodo's supply when they stripped him of his possessions. This was fortunate, for without lembas Frodo and Sam would not have made it to Mount Doom.

The lembas had a virtue without which they would long ago have lain down to die. It did not satisfy desire, and at times Sam's mind was filled with the memories of food, and the longing for simple bread and meats. And yet this waybread of the Elves had a potency that increased as travellers relied on it alone and did not mingle it with other foods. It fed the will, and it gave strength to endure, and to master sinew and limb beyond the measure of mortal kind.
The Return of the King: "Mount Doom," p. 213

Cordial of the Elves. Miruvor was a warm and fragrant clear liquid. Its special property was to give the drinker renewed strength and vitality. Miruvor was used by the Elves at their festivals. They did not reveal how miruvor was made, but it was thought to come from the honey of the undying flowers in the gardens of Yavanna.

Elrond gave a flask of miruvor to Gandalf when the Fellowship embarked on their quest. During the snowstorm on Caradhras, Gandalf gave each of the companions a sip of the cordial to revive their frozen and tired limbs. He gave them another sip when they stopped to rest, and a third sip when they first entered the Mines of Moria. At that point, the precious liquid had almost run out.

Miruvor was also mentioned in the lament Galadriel sang when the Fellowship left Lorien:

Yéni ve lintë yuldar avánier mi oromardi lisse-miruvóreva Andúnë pella ...
(The long years have passed like swift draughts of sweet mead in lofty halls beyond the West ...)
The Fellowship of the Ring: "Farewell to Lorien," p. 394

Names & Etymology:
The word miruvor, or miruvóre, was said to be derived from the language of the Valar. The exact translation is not known, but Tolkien compared it to the Greek nectar, for which he gave "death-defeater" as a probable etymological meaning. Tolkien invented the word based on the Gothic midu or medu meaning "mead" and woþeis meaning "sweet."

A favorite food of Hobbits. In the Shire, Farmer Maggot was noted for the fine mushrooms he grew at Bamfurlong, his farm in the Marish on the west bank of the Brandywine River. As a child, a yearning for mushrooms led Frodo Baggins to Farmer Maggot's fields to steal from his crop. Maggot caught young Frodo and threatened to set his dogs on him if he ever trespassed on his land again.

When Frodo and his companions found themselves in Farmer Maggot's fields as they made their way to Crickhollow on September 25, 3018 of the Third Age, Maggot remembered Frodo but did not make good on his threat. Instead, the Hobbits were treated to a meal including a dish of mushrooms and bacon, and Mrs. Maggot prepared a basket of mushrooms for Maggot to give to Frodo when they parted.

Drink enjoyed by many of the peoples of Middle-earth. Some of the most renowned vineyards of Middle-earth were in Dorwinion. Grapes were grown in great gardens there, and the wine that was made from them was very potent and brought deep and pleasant dreams. There were also vineyards in the Southfarthing of the Shire. One of the most notable Southfarthing wines was Old Winyards, a strong red wine.

Gandalf and Thorin requested red wine from their host Bilbo Baggins at the unexpected tea party in Bag End in April 2941 of the Third Age.

King Thranduil of Mirkwood was particularly fond of wine, especially wine from Dorwinion. Wine was imported by the Elves of Mirkwood in barrels down the Forest River from Long Lake. Bilbo was able to help his Dwarf companions escape from Thranduil's hall when the butler Galion and the chief of the guards fell asleep from drinking the King's wine.

Bilbo's father Bungo Baggins had laid down a store of Old Winyards in the cellar at Bag End. It was inherited by his son Bilbo. When he left the Shire in 3001, Bilbo gave a dozen bottles of Old Winyards to Rory Brandybuck. Frodo Baggins inherited the rest of the wine and he and his friends drank the last of it when Frodo left Bag End in September of 3018. He was pleased that the Sackville-Bagginses would not get their hands on the wine when they moved into Bag End.

Eowyn offered wine to King Theoden before he rode into battle on March 2, 3019, saying: "Ferthu Théoden hál! Receive now this cup and drink in happy hour. Health be with thee at thy going and coming!" (TTT, p. 127) She then offered the cup to their guests, and when she handed it to Aragorn her hand trembled at his touch. When Aragorn embarked on the Paths of the Dead, she again offered him a cup of wine.

Thranduil's son Legolas was interested to learn where Merry Brandybuck and Pippin Took had come upon wine in the ruin of Isengard when he was reunited with the Hobbits there on March 5, 3019.

In Henneth Annun on March 7, Faramir gave Frodo Baggins and Sam Gamgee a pale yellow wine, and as it coursed through their bodies they felt refreshed and at ease. The wine did not cause Frodo to lose his caution, but Sam began to smile and hum to himself, and the wine may have loosened his tongue for he mentioned the One Ring to Faramir. But Faramir rejected the Ring and pledged to help the Hobbits.

Pippin was given wine by Denethor when he arrived in Minas Tirith on March 9. After the War at the celebrations on the Field of Cormallen on April 8, Pippin and Merry served wine to King Elessar and King Eomer as esquires of Gondor and Rohan.

All entries are Copyright © by the Thain from former tuckborough.net. Please contact me if you are Thain or know anything about how to contact the original author. 2003-2011, The Thain's Book - thainsbook.minastirith.cz - e-mail: thain at tuckborough.net