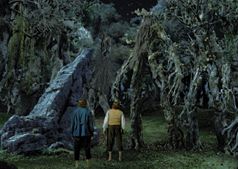 Meeting of Ents. Entmoots were held to discuss matters of importance. By the end of the Third Age these meetings had become rare.

When Treebeard met Merry Brandybuck and Pippin Took in 3019 of the Third Age and learned about the war that was brewing, he decided to hold an Entmoot to discuss what the Ents should do. Treebeard was particularly concerned about the involvement of Saruman, who lived in Isengard near Fangorn Forest. The Wizard had been expanding his power and had amassed an army of Orcs who had cut down many trees in Fangorn.

On the morning of February 30, Treebeard brought Merry and Pippin to Derndingle, a dell in the southwestern part of Fangorn that was the traditional site of the Entmoot. They were met by about fifty Ents. The first order of business decided by the Ents was that Merry and Pippin were not Orcs and that Hobbits should be added to the list of living creatures. Treebeard then began to explain matters concerning Saruman and the war to the other Ents so they could come to a decision. One Ent named Quickbeam made up his mind the first day and he left the Entmoot to keep Merry and Pippin company.

The Entmoot lasted for three days. Merry and Pippin could hear the voices of the Ents rising and falling as they debated. Then suddenly, on the afternoon of March 2, there was silence followed by a great shout. The Ents had decided to go to war against Saruman. They marched out of Derndingle, singing as they went, and headed south to Isengard. 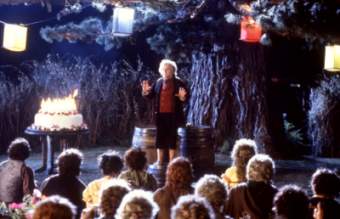 Last birthday party of Bilbo Baggins held in the Shire. On Thursday, September 22, 3001 of the Third Age, Bilbo threw a party of special magnificence in honor of his eleventy-first - or 111th - birthday. It was also the thirty-third birthday of Bilbo's heir Frodo Baggins, who came of age that year.

Preparations for the party were made in the field south of the door of Bag End that was afterwards known as the Party Field. A large white gate and wide steps were built into the bank between the field and the road. Tents and pavilions were erected in the field; the largest pavilion encompassed a large tree that came to be known as the Party Tree. In the northern corner of the field a large open-air kitchen was built, and cooks from every inn and eating-house from miles around were hired to prepare the food.

A sign was hung on the gate of Bag End that read "No admittance except on Party Business." Carts began to arrive at Bag End filled with provisions for the party, and orders were placed at local businesses in Hobbiton and Bywater. Dwarves arrived in a wagon laden with goods, and at the end of the second week in September Gandalf the Grey came in a cart filled with fireworks for the party.

Bilbo wrote invitations to practically everyone living in the area and to many other Hobbits from around the Shire and a few from beyond its borders as well. One hundred and forty-four Hobbits received invitations written in gold ink to a special family dinner to be held during the party. Additional Messengers had to be called in to handle the large volume of invitations and responses that deluged the post-offices in Hobbiton and Bywater.

On the day of the party, Bilbo met his guests at the gate of the Party Field and distributed gifts, as was the Hobbit custom on birthdays. Many children received wonderful and magical toys of Dwarf-make from the Lonely Mountain and Dale. Some guests went out the back way and came in again to receive an additional gift.

From elevenses to 6:30, there were songs, dances, music, and games. Food and drink were provided throughout the day, and the Hobbits sat down for meals at lunch, tea, and supper. The fireworks began at 6:30. It was an amazing and beautiful display designed by Gandalf. The last firework was in the shape of a red-gold dragon that flew over the Party Field three times and then burst over Bywater. That was the signal for supper.

A splendid supper was provided for all the guests. The 144 special guests dined in the large pavilion. In addition to large amounts of food and drink, the guests also received musical crackers that contained small musical instruments from Dale. After dinner, Bilbo stood on a chair under the Party Tree and gave a speech. As his guests' attention started to wander, Bilbo made a startling announcement:

"I regret to announce that - though, as I said, eleventy-one years is far too short a time to spend among you - this is the END. I am going. I am leaving NOW. GOOD-BYE!"
The Fellowship of the Ring: "A Long-Expected Party," p. 39

Bilbo then vanished from sight in a blinding flash of light. He had put on his magic Ring which turned the wearer invisible, and Gandalf had provided the flash to protect the secret of the Ring. The party guests were astonished, and they decided that their host had played a prank on them that was in very bad taste. They called for more food and drink to appease their shock and annoyance. The Sackville-Bagginses left in anger, while Rory Brandybuck speculated that Bilbo was off on another adventure.

Rory was correct, for Bilbo was never seen in the Shire again. He wandered for a while and then settled in Rivendell. Frodo Baggins inherited Bag End and he continued to throw parties - on a much smaller scale - in honor of their birthday.

Midsummer fair in the Shire. The Free Fair was held on the White Downs as part of the holiday called the Lithe, or Midsummer. The Lithe was between Forelithe (June) and Afterlithe (July) and included Mid-year's Day and a day before and a day after. In Leap-years there was a fourth Litheday called Overlithe after Mid-year's day.

The Free Fair was held during the daytime. Anyone who wanted to could set up a booth at the fair free of charge. Every seven years at the Free Fair, an election was held for the position of Mayor of Michel Delving.

Names & Etymology:
The Free Fair was so called because there was no charge for setting up a booth.

Disease that decimated the population of Middle-earth. The Great Plague began in 1635 of the Third Age and continued through 1636 and 1637. The Plague was probably the work of Sauron, sent with the intention of weakening his enemies and causing them to relax their watch on Mordor.

The Great Plague originated in Rhun. The Easterlings, who were allied with Sauron, were the first to be afflicted by the Plague. The disease was then carried westward on the wind to the lands of Sauron's enemies.

In the winter of 1635, the Northmen of Rhovanion were stricken. They were not skilled in healing or medicine, and the Plague spread quickly among them because most had taken shelter from the cold weather in communal houses.

In 1636, the Great Plague spread to Gondor. King Telemnar and all his children died and he was succeeded by his nephew Tarondor. The Plague had a devastating effect on Gondor and countless people perished. Cities were the hardest hit. Osgiliath was largely deserted and began to fall into ruin. King Tarondor later moved the capital to Minas Anor.

As the population of Gondor declined, there were fewer guards to keep watch on Mordor from the strongholds of Minas Ithil, the Tower of Cirith Ungol, and the Towers of the Teeth. Sauron had been driven from Mordor in the War of the Last Alliance, but unknown to the Men of Gondor he had survived and he wanted to return to his former realm.

The Great Plague continued to spread. The province of Gondor called Calenardhon was largely deserted. The Men of Dunland were not as badly affected as other peoples because they kept themselves isolated but they did not avoid the Plague altogether. Tharbad's garrison of soldiers, mariners, and engineers could no longer be maintained and the Bridge of Tharbad and the North-South Road began to decay.

In Eriador, the Dunedain who dwelled in Cardolan were wiped out along with most of the rest of the inhabitants, especially in Minhiriath. The Barrow-wights came to haunt the tombs on the Barrow-downs at that time.

The Great Plague came to the Shire in 1637. The Hobbits suffered great losses but their community survived, as did the Hobbit settlements around Bree. The Dunedain of Arthedain - ruled at that time by King Argeleb II - escaped heavy casualties. The strength of the Plague had finally diminished, but its effect on Middle-earth had been devastating.

Last Riding of the Keepers of the Rings

The journey of the Ring-bearers to the Grey Havens. In the Woody End on September 22, 3021 of the Third Age, Frodo Baggins and Sam Gamgee met Elrond, the keeper of Vilya, and Galadriel, the keeper of Nenya, along with Bilbo, who had borne the One Ring for 60 years. They were accompanied by a number of Elven folk including Gildor. Together they rode through the Shire, passing south of the White Downs then past the Far Downs and the Tower Hills and on to the Grey Havens, where the River Lune widened into the Gulf of Lune and then flowed into the Sea.

At the Havens on September 29 they were met by Cirdan the Shipwright and Gandalf, the keeper of Narya. Merry Brandybuck and Pippin Took were also there to say good-bye to Frodo. Frodo and Bilbo boarded the ship with Elrond, Galadriel, and Gandalf and sailed West over the Sea to Tol Eressea in the Undying Lands. Merry and Pippin rode back to the Shire with Sam; for although Sam had also been a Ring-bearer he did not pass over the Sea until many years later in 61 of the Fourth Age.

Moment of silence before meals. The Standing Silence was a custom of the Dunedain who were the descendants of the Men of Numenor. Before eating, the Dunedain stood and faced westward toward the Sea where Numenor had been and toward the Undying Lands beyond.

Frodo Baggins and Sam Gamgee took part in the Standing Silence with Faramir and the Rangers of Ithilien at Henneth Annun on March 7, 3019 of the Third Age. The Standing Silence was also observed at the feast following Sauron's defeat at the Field of Cormallen on April 6.

All entries are Copyright © by the Thain from former tuckborough.net. Please contact me if you are Thain or know anything about how to contact the original author. 2003-2012, The Thain's Book - thainsbook.minastirith.cz - e-mail: thain at tuckborough.net